The Sesimbra beaches have been known for many years as "The Children's Beach." The extensive beach of fine sand, calm waters, the Beach Libraries, the sports, leisure and recreation areas are some of the features sought by families, schools and nurseries for children. After the beach, there are various activities that can be done with the little ones.

Sesimbra pioneered Beach Libraries, a project which started in 1986 to promote the development of reading habits during the summer holidays. The reading stalls have books of various genres, magazines and daily newspapers for loan and reading on the beach and educational games for various ages. Additionally, they organize various events, including workshops and crafts, painting, storytelling  and games sessions. Currently there are beach libraries on the beaches of California and Ouro, Moinho de Baixo, Meco, and Lagoa de Albufeira. 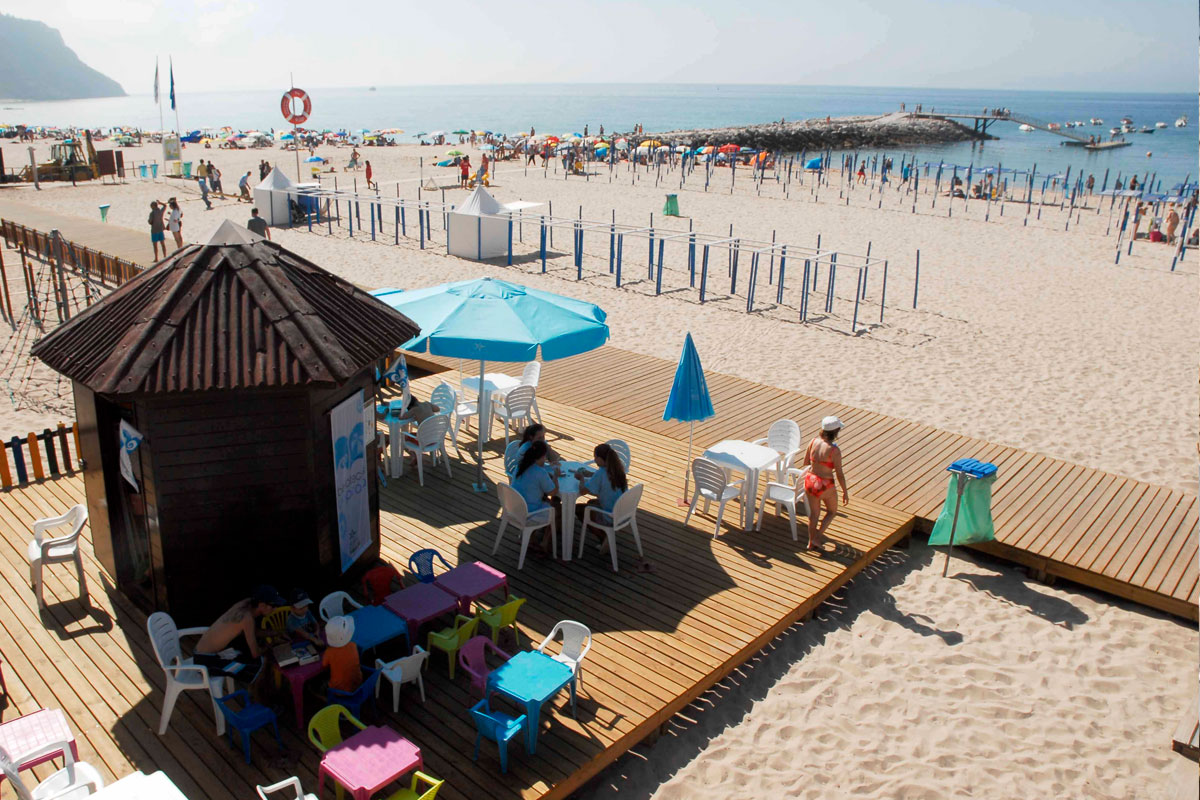 The Library and Municipal Cine Theatre is located right in the center of the village, a few meters from the beach. In this venue, there are many attractions for the younger ones. The library area  is equipped for the young with various types of literature, computers, games, workshops area, Story Time room, where reading sessions are held, and a baby area with activities and music for children up to 3 years of age. In the same building there is a Cine Theatre with a regular programme of music, theatre and cinema, including the great successes in animation.

The Augusto Pólvora Park in Maçã, is the ideal place to play, practice sports,  have picnics or to simply take a stroll. Opened in 2017, it provides a set of facilities for the younger ones, which can be used free of charge, as a Skate Park, a sports complex, a playground very popular with the little ones, an ecopark, which aims to encourage children and youth to appreciate Nature’s shapes and textures, and a replica of a young dinosaur who loves to take pictures next to the children. 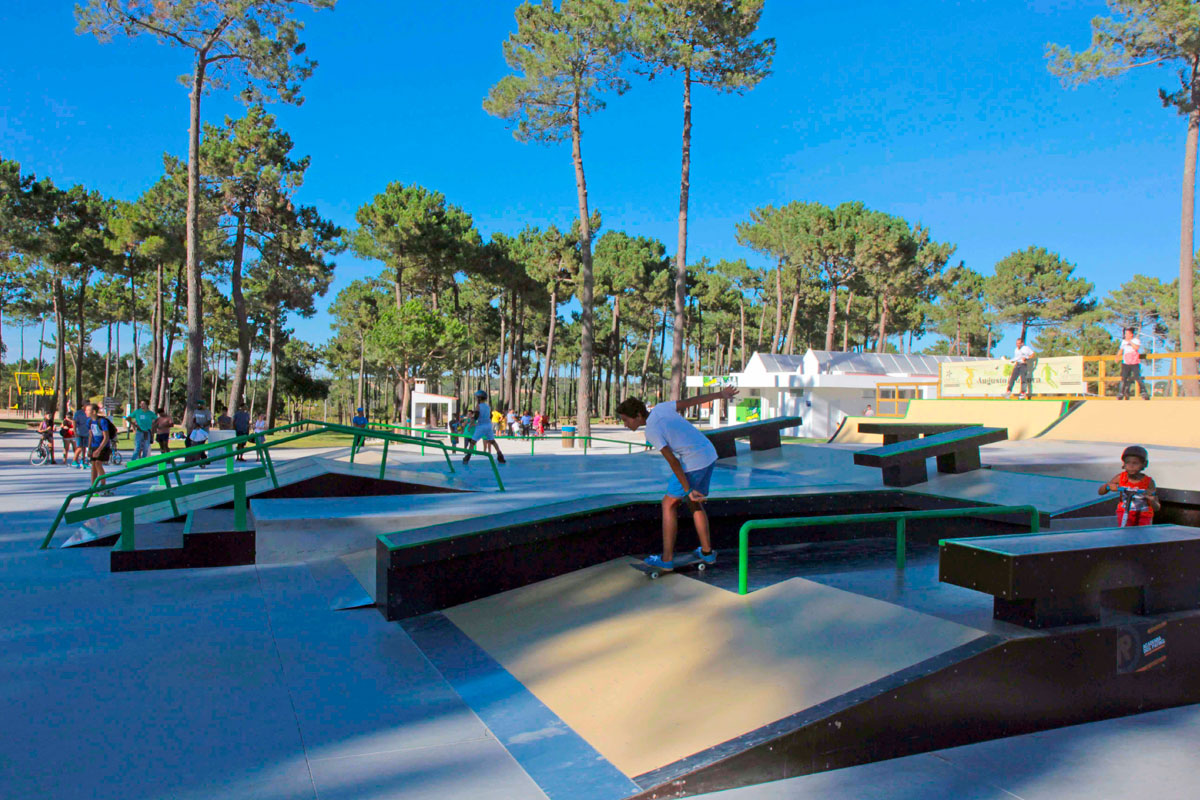 The holidays are also a good time to learn. Sampaio Milling, a building which worked for decades as mill for wheat and corn, was transformed into a museum that preserves the machines used for milling, and hosts an exhibition that shows how they worked. On weekends, the Sesimbra Flavours market takes place here, selling fruit and some of the traditional confectionery that are very popular with both young and old. 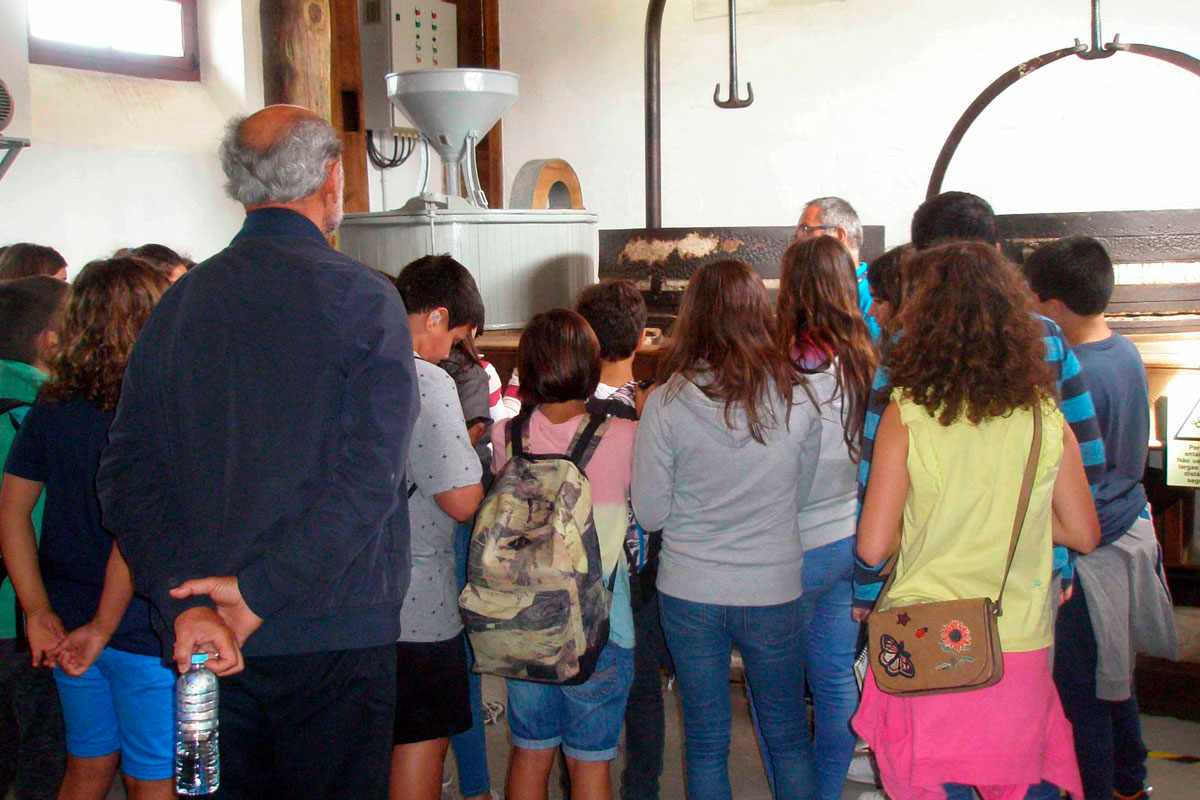 To be close to nature in one of the richest places in the region, in terms of  biodiversity, while watching some of the most beautiful birds that cross our country is what is proposed by  the Interpretive Centre of Lagoa Pequena, in Lagoa Albufeira, one of the birdwatching havens of  Portugal. The Centre, managed jointly by the City Council, the Institute for Conservation of Nature and Forests and the Portuguese Association for the Study of Birds, organizes various activities and guided tours. Children have at their disposal an explorer’s backpack which makes it an unforgettable experience. 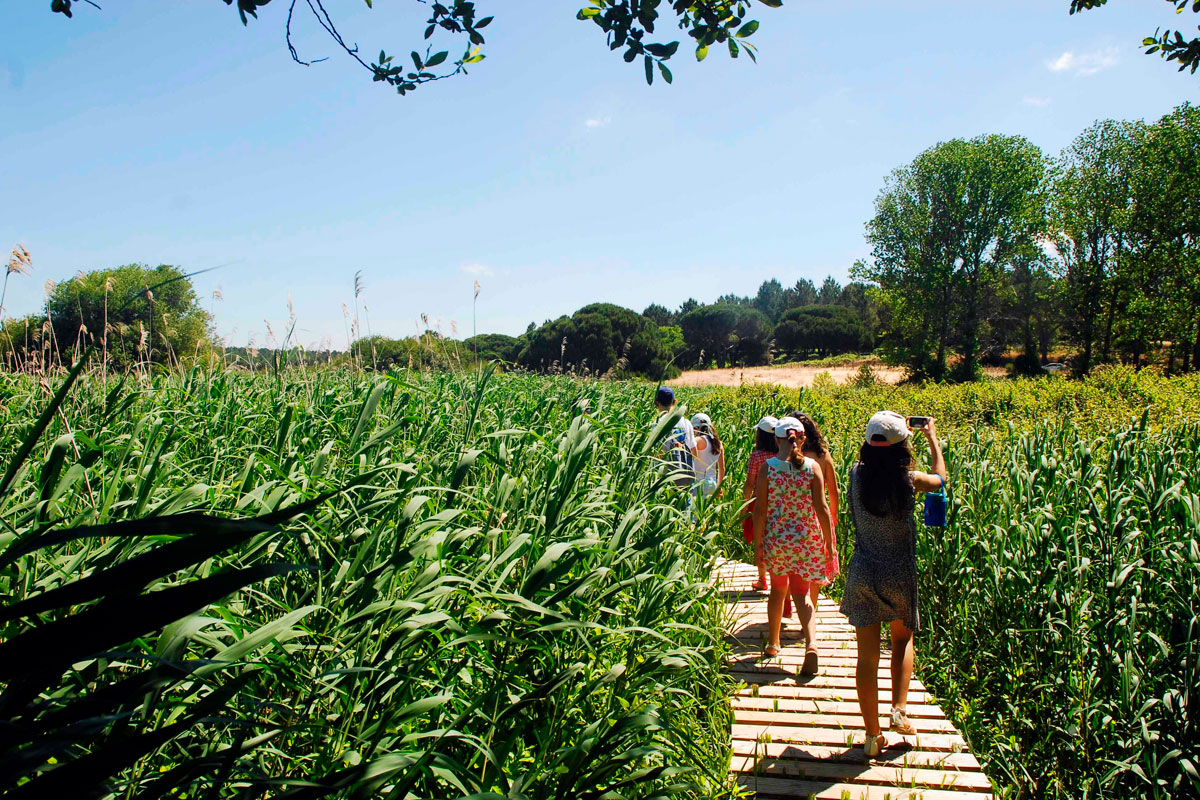 In Search of Dinosaurs

Dinosaurs are creatures that live in children’s imaginations. These giants roamed through Sesimbra millions of years ago and left their mark which can now be seen in three places. One of the places where these traces can be found  is the Interpretive Centre of the Natural Monument Pedreira do Avelino, in Zambujal, which preserves footprints over 150 million years old. In Cabo Espichel, traces can also  be observed in Pedra da Mua and Lagosteiros. These are very interesting tours, which must be closely monitored by adults, as  some of the paths run close to the cliffs. After these sites we suggest a visit to the Augusto Pólvora Park, where there is a replica of a brachiosaurus, a herbivorous sauropod that lived in this region 145 million years ago. 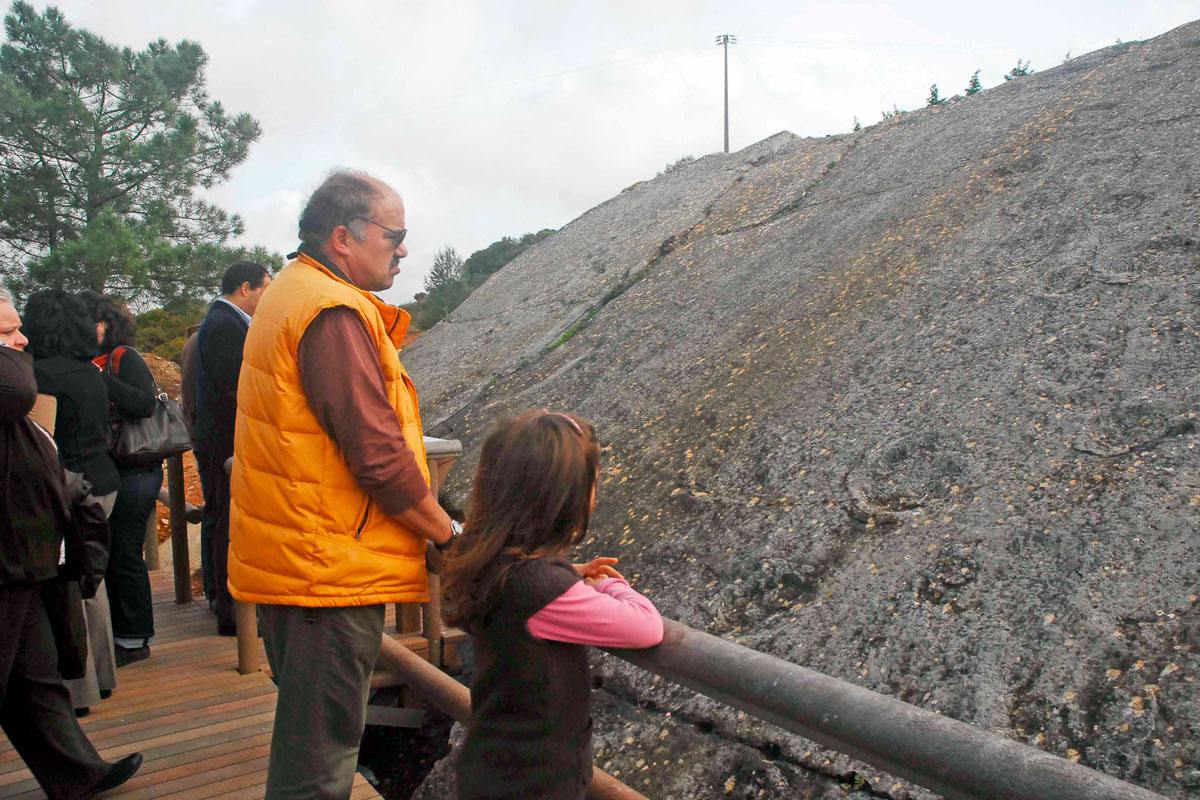 Walking around the walls, protected in the old days by warriors, and watching the sea and the landscape is an experience not to be missed in the Sesimbra Castle. Inside there are two permanent exhibitions about the Castle of Sesimbra and the castles of Portugal, which include a scale model of the castle at the time it was inhabited, which draws the attention of children. During the visit a clearly marked route can be followed, which leads us to some of the most important places of the Castle. 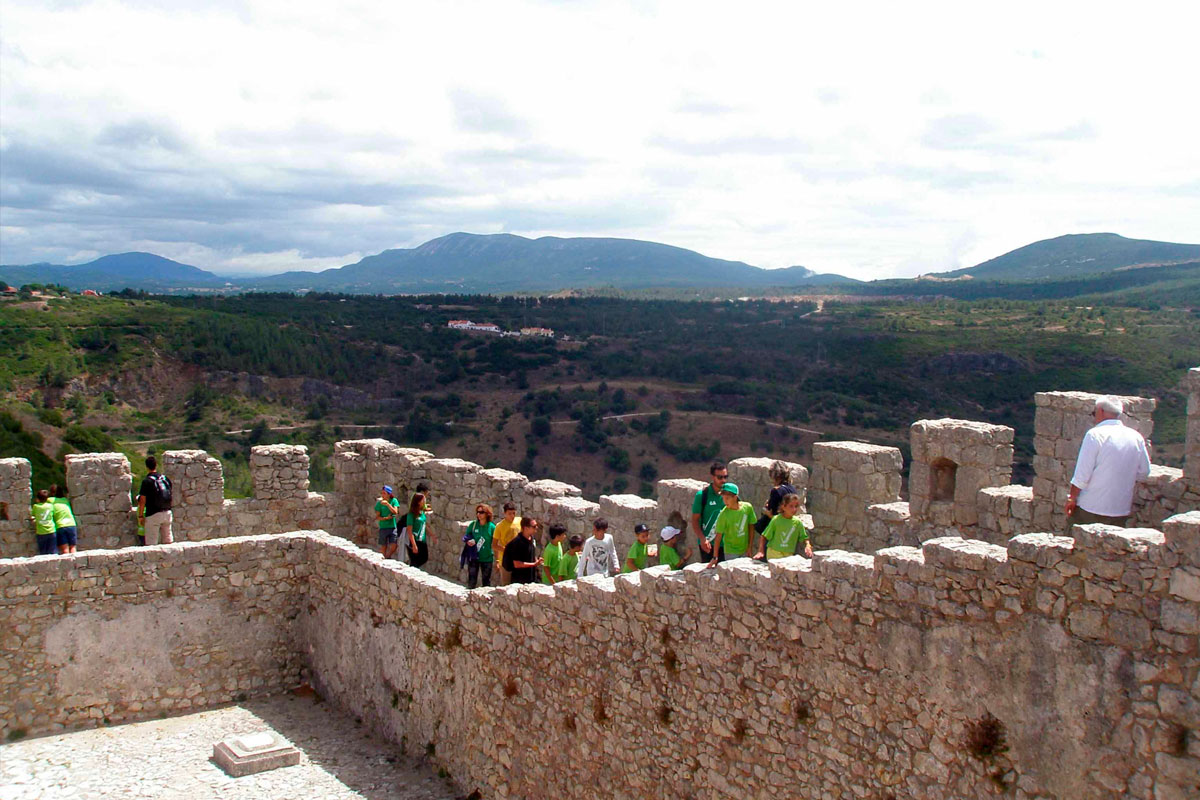