Moinho de Baixo beach, better known as Meco, due to its proximity to the village of the same name, is characterised by the long beaches that extend down to the Bicas beach and became known as one of the the first nudist beaches in Portugal. After Bicas comes a rugged coastline that draws the landscape up to the majestic Cabo Espichel.

From Meco to Espichel

After Meco and Rio de Prata, the sandy beach becomes narrower and creates a natural division between Rio de Prata and Bicas beach. A "spout" of ice water that drips from the rock explains the name of the beach (Bicas). We notice that the surf no longer happens on the shore but further out to sea. The sea is speckled with dark dots we easily recognize as being surfers. This is one of the best places in the region to practice this sport but those who know say that only the most experienced should venture these waters.

Bicas is the end of the line. It is here that ends the long sandy beach which extends from Costa da Caparica. There were times when this was the route used by peasants to take wood, vegetables and algae, for ointments and medicines ,to the Almada markets.

From here, to continue to along the coast of Sesimbra, we have walk along the top of the cliff. 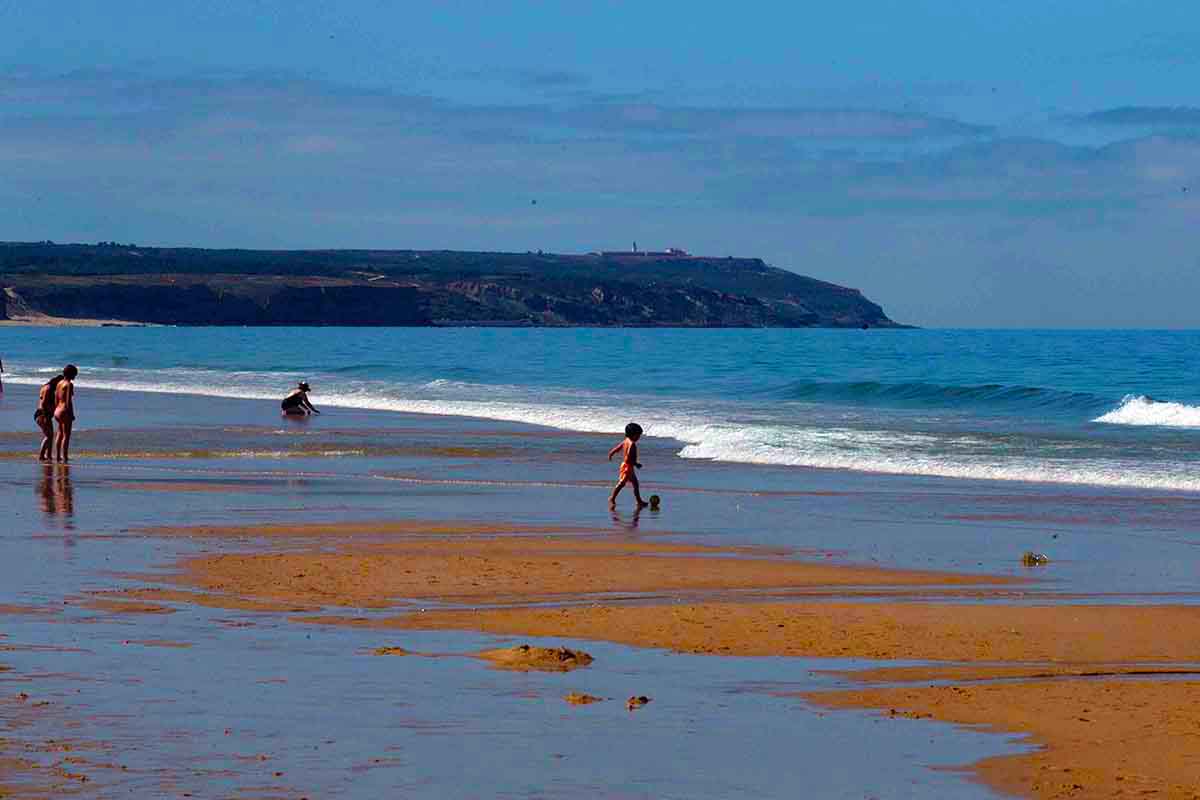 A trail that flows into the Foz beach

After a few kilometers, the Bicas climb is a formidable obstacle. However, we know that at the top we will find one of the most beautiful walking routes in the area and this gives us courage. It is not necessary to have a great sense of direction or GPS, as there is a Great International Hiking Route properly marked. We are safely guided by the white and red lines along the route. The sea air, mixed with the vegetation, gives a unique scent to our hike and in no time we reach the estuary, a beach protected by a huge cliff which is both threatening and welcoming. Near the sea we can make out a rock formation extending along the coast. We follow this dark rock heading south and we come across what remains of the old fort of S. Pedro da Foz, a seventeenth century fortification, that must have been used to to protect the Santuário do Cabo (Cape Sanctuary). 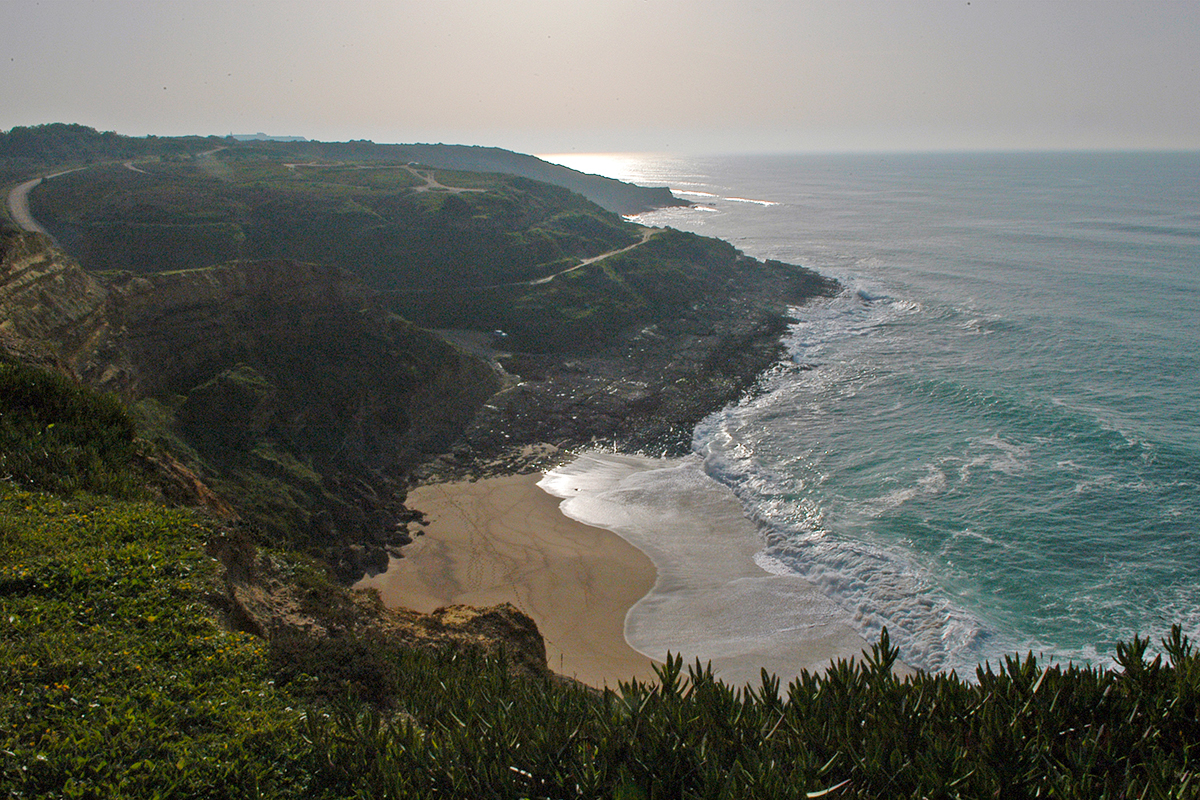 Santuário do Cabo in sight

A small beach hidden in the rock invites us to risk a dangerous trail, but prudently, we chose to keep to the route by Aguncheiras. The coast is steep and windy, but the footpath is comfortable. The sky is clear and when we look back we see the perfect curve described all the way to Bugio. A group of cyclists passes us by and further along it’s our turn to overtake some hikers. 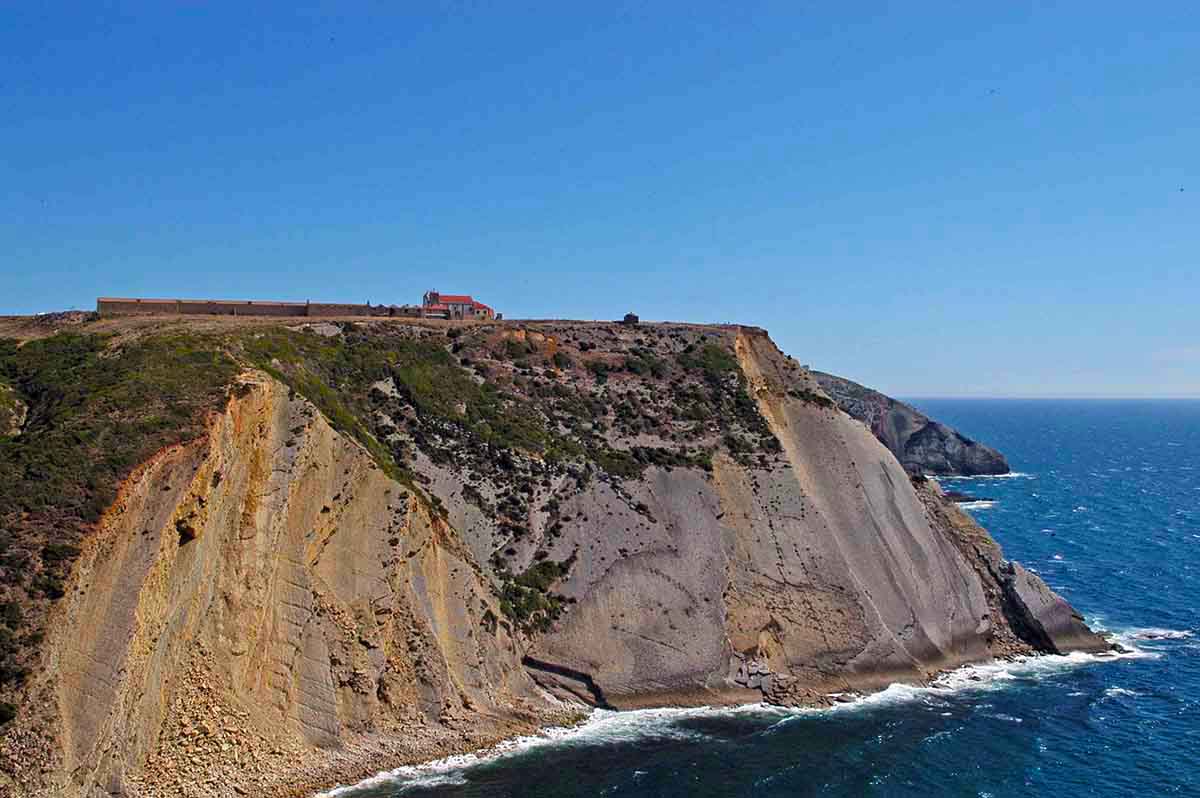 Shortly before arriving at the sanctuary we find the famous dinosaur footprints of Lagosteiros (lobster fishermen) Beach. Despite its name, the beach became known for its seaweed which was collected for medicines and cosmetics. The sea is apparently calm, but not at all suitable for swimming. Legend has it that after a shipwreck, a mule saved the image of Our Lady, climbed with it and placed it where today lies the Ermida da Memória, a chapel dated back to the fifteenth century. The marks on the rock, identified as dinosaur footprints are, according to this version, the route taken by the mule. A beach, different from all the others that makes us feel small and which transports us through history. We go up, past the Sanctuary and the Lighthouse and come to the end of the municipality’s west coast, which is exactly 17.916 kilometers long.

Besides the Algarve, Sesimbra is the only place in mainland Portugal with a coastline facing south. The route is winding in this area and while it is marked all the way to the Fort of S. Domingos da Baralha, the presence of an experienced guide makes us more relaxed. We walk along a red dirt road and return to the familiar hiker markers, this time yellow and red , as this was a Small Route.

The ground is steep, treacherous and demands attention. The contrast between the green hills and the blue sea is accentuated and worth the effort. In the distance, recreational boats leave a wake of foam on the surface, while around 18 meters below lies the River Gurara, a ship wrecked in the the 90s which today is a favourite spot for divers. 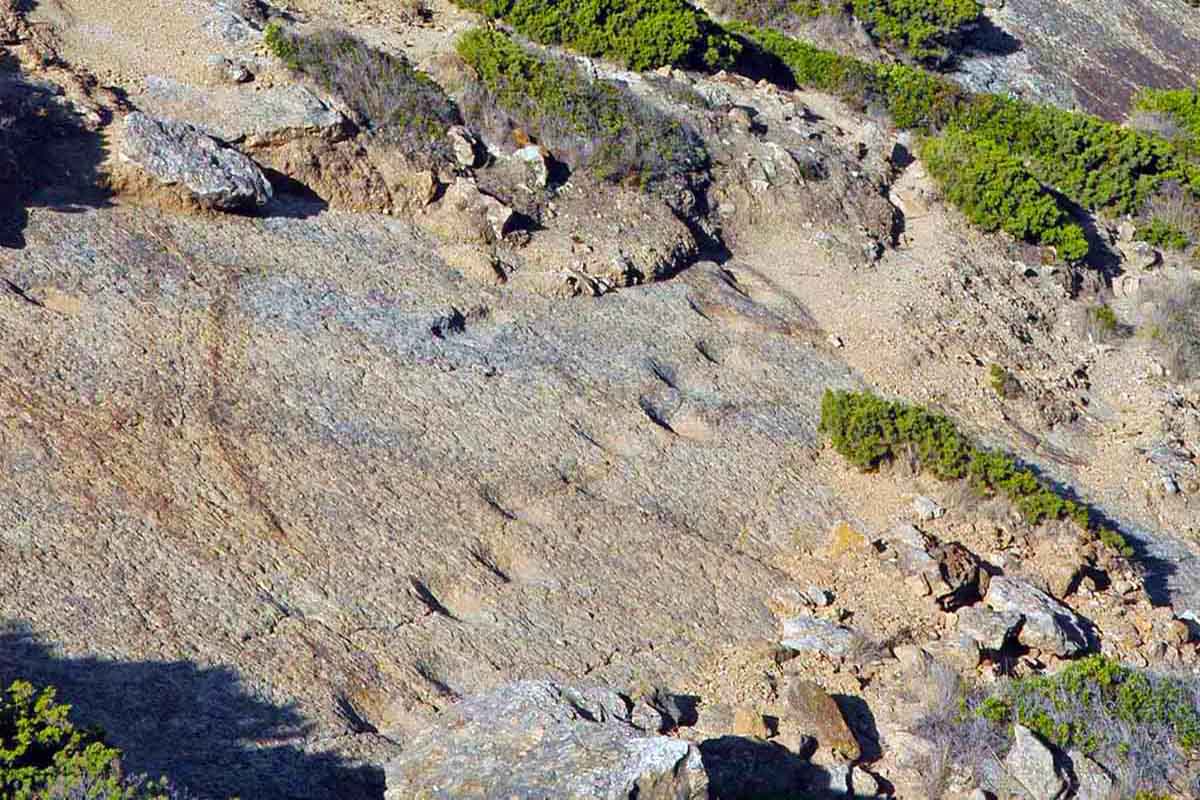 After "doubling" the Cape, we come across small inlets hidden in the rocks, from which stands out one of the most beautiful beaches of Portugal - Ribeiro do Cavalo. Continuing along, we arrive at the Harbour, giving on to the…